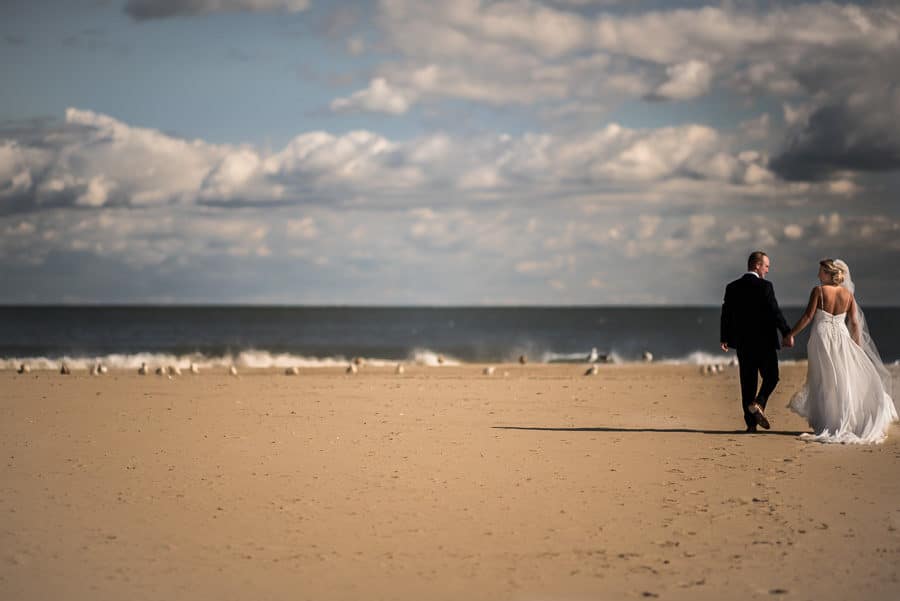 Our time at the shore for Corine and Brian’s Yacht Club of Stone Harbor wedding was filled with excitement, anticipation and lots of coffee. We started in Sea Isle with Corine, her family and her bridesmaids at their beach house. We were enthusiastically greeted by Corine and Brian’s dog, Dani, who was wearing a “Dog of Honor” bandana. She is such a sweet dog and I couldn’t wait to have her join in the photos after the ceremony.

The fantastic team from Blaze Salon was finishing up hair and makeup so we grabbed Corine’s Stella York lace wedding gown. It was lighter than air with chiffon and corded lace, spaghetti straps, and a low cut back with a train that fanned out with an elegant spray of scalloped lace. We wanted to shoot the dress on the third floor deck, but the wind had other plans. I found another spot that I like even better though. Once everyone was finished with hair and makeup, I made sure to grab a few shots of the girls in their robes; the bridesmaids wore navy with gold glitter names on the back and of course the bride wore white. We then focused on shoes, veil and jewelry before asking the bridesmaids and Corine’s mom to get dressed. I loved the navy chiffon dresses from Allure Bridesmaids and the mother of the bride looked stunning in a deep plum colored gown. Before getting dressed, Corine’s grandmother gave her something borrowed; it was her late grandfather’s wedding ring. It was such a beautiful moment and I feel privileged to have been there to capture it. Next, Corine got into her gown and looked incredible! Her mom and sister helped with her shoes, jewelry, including the bracelet that Brian gave her as a wedding gift, and veil. We grabbed Corine’s bouquet from Blooms at the Country Greenery and got started on bridal portraits.

Next we met up with Brian and his groomsmen at St. Joseph’s Catholic Church which was down the street. They were all obviously excited for the big day, but none more than Brian. We did some portraits of Brian in his navy blue suit with his custom engraved cuff links from Corine. His dad helped with his boutonniere while the groomsmen watched on. We had to remind them that they all needed their boutonnieres on as well….groomsmen putting on boutonnieres is always a comical scene. Guests began to arrive so we got set up for the ceremony. We were joined by Katie from Martin’s Videos who was great to work with throughout the day.

Corine and Brian’s traditional Catholic ceremony included a full mass celebrated by Reverend O’Hara who was a close friend of Corine’s late grandfather. He had everyone laughing and crying and really made the ceremony so personal. We did family formals in front of the alter before heading off for a little tour of Sea Isle. The wedding party piled on the AC Jitny and we set off for the Sea Isle City Pavilion. Onlookers congratulated the couple as they enjoyed the nice day. We got some photos under the pavilion, along the dunes and on the Sea Isle City boat. Corine and Brian even celebrated with a champagne toast on the beach. Our next stop was back at the family beach house. We set off for the beach where Brian proposed to Corine. Her dad brought their dog, Dani, out to the beach for photos. Dani was more interested in digging, but we got a few good shots before letter her go back home. Corine and her bridesmaids ditched their shoes and we lined the entire wedding party up in the sand. We then sent them back to the house so we could move on to portraits of the couple. Corine and Brian seemed so at home on the beach. We had fun running around in the sand…though they may have thought I was crazy when I asked them to run through the giant group of seagulls! They were good sports though. We were all a bit windblown at that point so we head back to the house. Our next stop was the Yacht Club of Stone Harbor wedding venue where the team from Blaze Salon was waiting there to touch up the ladies hair and makeup.  The wedding party enjoyed a private happy hour complete with a champagne toast and lots of delectable hors d’oeuvres. We grabbed some photos on the second story deck overlooking the bay before everyone headed downstairs for cocktail hour.

When it was time for entrances, DJ Johnny A, also known as Captain Johnny, from Eclipse Entertainment gathered everyone on the dance floor. Captain Johnny announced everyone before inviting Corine and Brian in the center of the room for their first dance to “Just One Look” by Doris Troy. Guests then made their way to the beautiful Bayfront dining room. Reverend O’Hara gave a lovely blessing followed by a poem by Corine’s dad. Corine’s sister gave her maid of honor speech next and spoke about the way the newlyweds balance each other perfectly. Brian’s brother and best man brought down the house with his speech which included how he brought the couple together when they were children laying the ground work for their entire relationship. After dinner, Corine and her dad danced to “My Girl” by the Temptations and Brian danced with his mom to “How Sweet It Is” by James Taylor. The DJ then invited all the mothers and sons onto the dance floor for a special dance to “I’ll Always Love My Mama” by the Intruders.

The cake from The Bakeworks was simple and elegant with navy blue ribbon at the base of each tier. Corine and Brian cut the cake and sealed it with a kiss before getting back to the dance floor. The rest of the night was full of great dance moves, fun in the photo booth and tons of laughter. One of my favorite parts of the night was a special song dedication for Corine’s sister. Captain Johnny invited Caitlin up on stage and played “Africa” by Toto. She immediately took the mic and started singing along; before long Corine and Brian were up there with her and the whole crowd was singing along. It was fantastic!

It was an honor to be a part of Corine and Brian’s amazing day. Thank you for teaching me about the shore and sharing your day with me! I hope you enjoy the photos and slideshow below. Planning a shore wedding? Contact me to capture it!